Angola is one of the famous nations to welcome foreigners to stay, work or do business in. Document Attestation for Angola is a crucial procedure that is to be followed mostly when you are planning to visit to Angola. It is an important part of the authentication process which will validate the authenticity and genuinity of your documents and yourself. Educational Certificate attestation for Angola can be very lengthy process. Hence, it is preferable to get your documents attested from experts. Authentication services provider are experienced in their job and know the details of the procedure. There are limited reliable Angola attestation services though. It is also important to know if the attestation agency is legitimate.

What is the Angola Attestation?

Attaining attestation stamp from Angola embassy or consulate is a type of legal procedure that will provide with the proof of the authenticity of the document. Angola Embassy attestation is the certification of documents that are required to perform business in Angola or obtain a visa for the same. It is needed as it will sanction you as a permissible individual. To get the document attested, one needs to get the concerned papers checked at different levels of the government. Only the authorised persons are allowed to attest the documents. 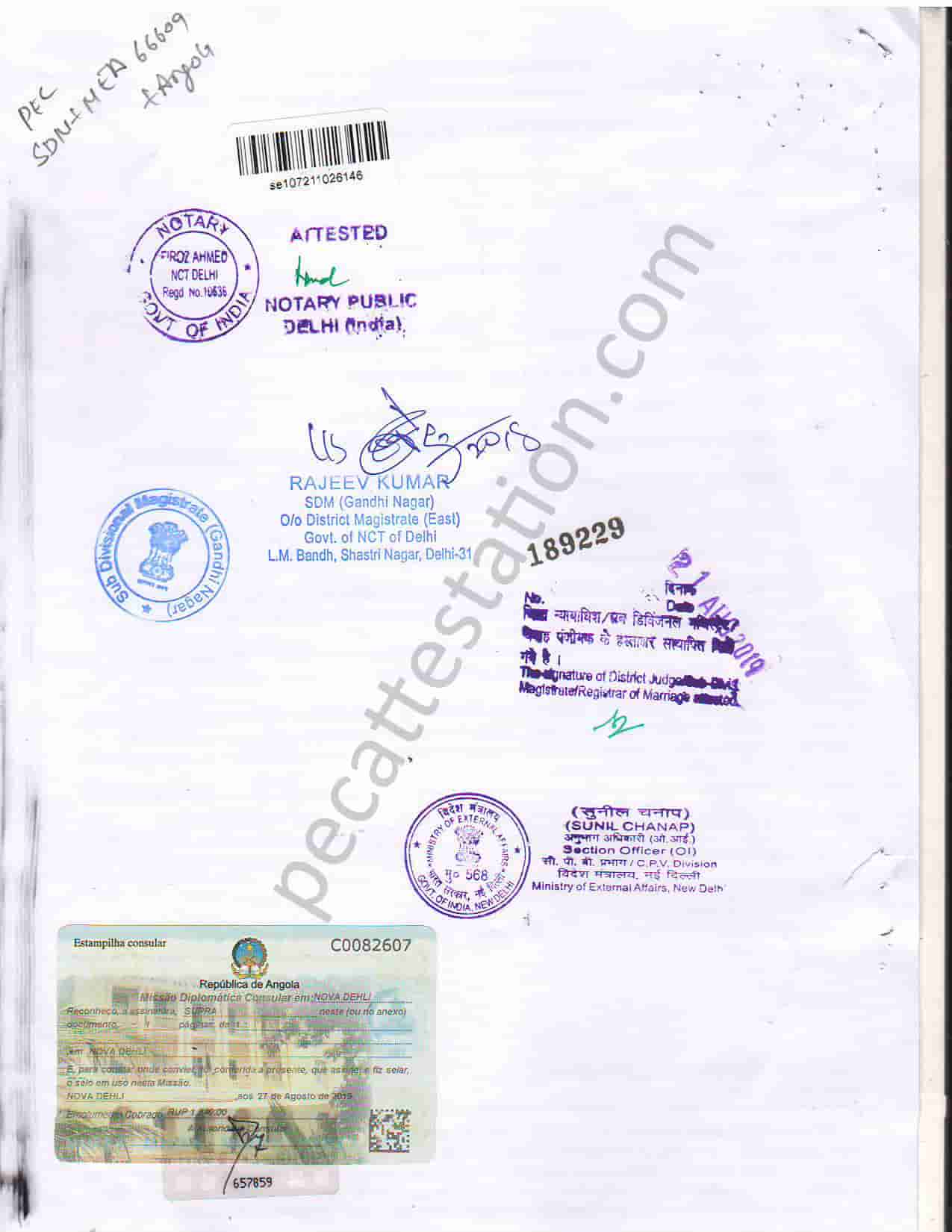 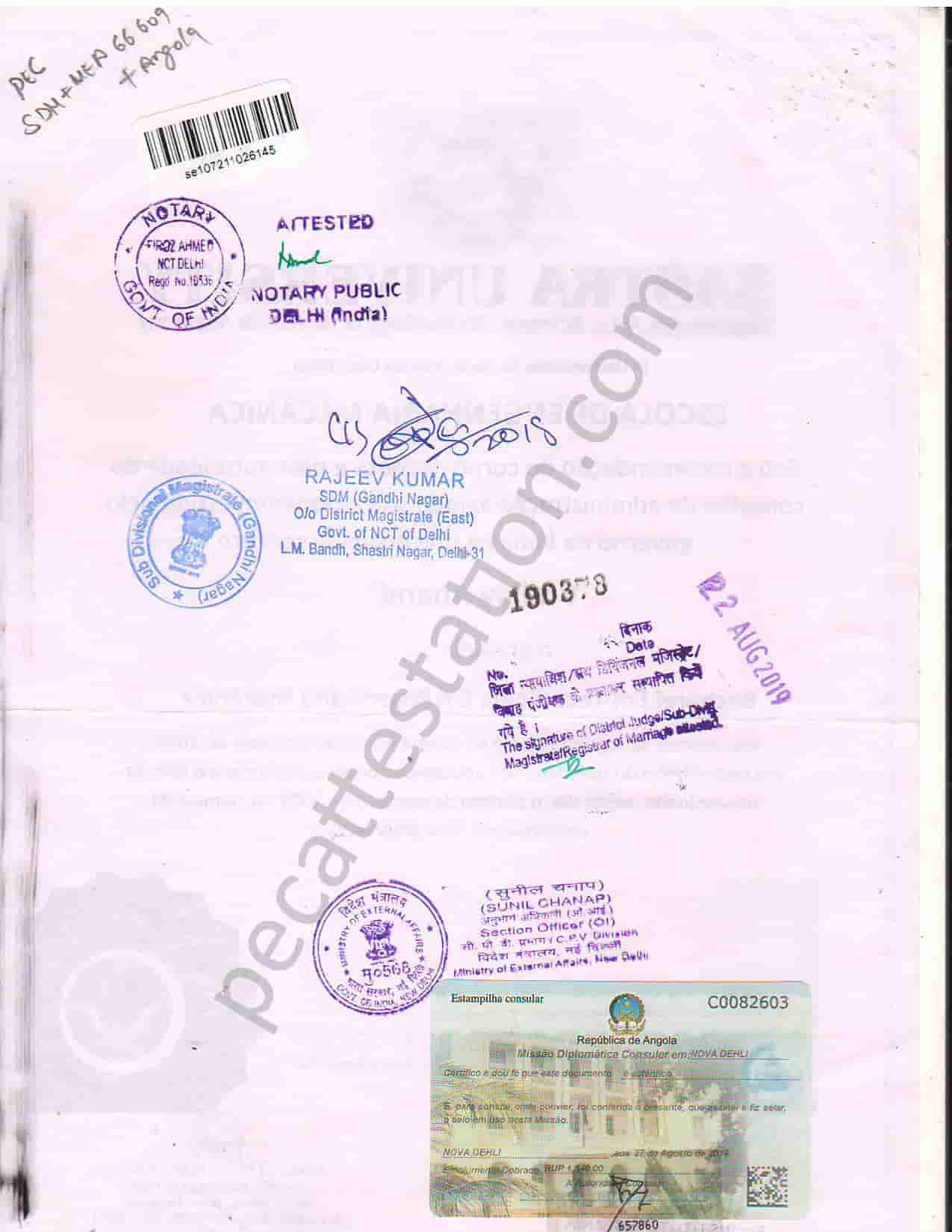 Why is Angola Attestation required?

We need certificate attestation for Angola visa for various purposes like work visa, student visa, residence visa or for professional reasons. It is surely a part of evidence that shows that you are a genuine person/company and visiting Angola with no ill intentions. It proves that your documents are true and can be allowed in the country.

Document attestation for Angola comprises documents like personal documents, educational documents and commercial documents. It is a part of security that ensures the Angola government of your trustworthiness. Also, doing so shall build trust in between the employer and employee or two businessmen when you are travelling for work or business.

The process for Angola attestation is indirect and is carried out by different stages of the government. It was decentralized on January 1st, 2019 by the Ministry of External Affairs to the local RPOs and Branch Secretariats. It comprises of attestation from the notary, SHD or HRD, SDM at times, the MEA and the Embassy. The procedure is listed below:

Depending on the origin or type of the document, the procedure for the attestation of educational certificates will vary. Following are given the different procedures that are specific to the place of issuance of the document and its kind.

2. For out of Maharashtra issued documents

3. As per the Embassy requirement where HRD compulsory

How to get Certificate Attestation for Angola?

While searching for quick attestation services, one should look up the parameters legitimate Angola attestation agents need to pass. Be it professionalism or genuinity, the agency must be thorough with them all. Among all the options available, PEC has earned its name on the top. We are experienced in the field of providing the quick and best Angola attestation services. We maintain transparency of the procedure that is being carried out and you will be kept updated with the progress. Only licensed professionals work with the firm. We have your needs as our first priority. We offer you with authentication at different levels of authorisations available, right from the notary to the embassy, PEC will get it work done. 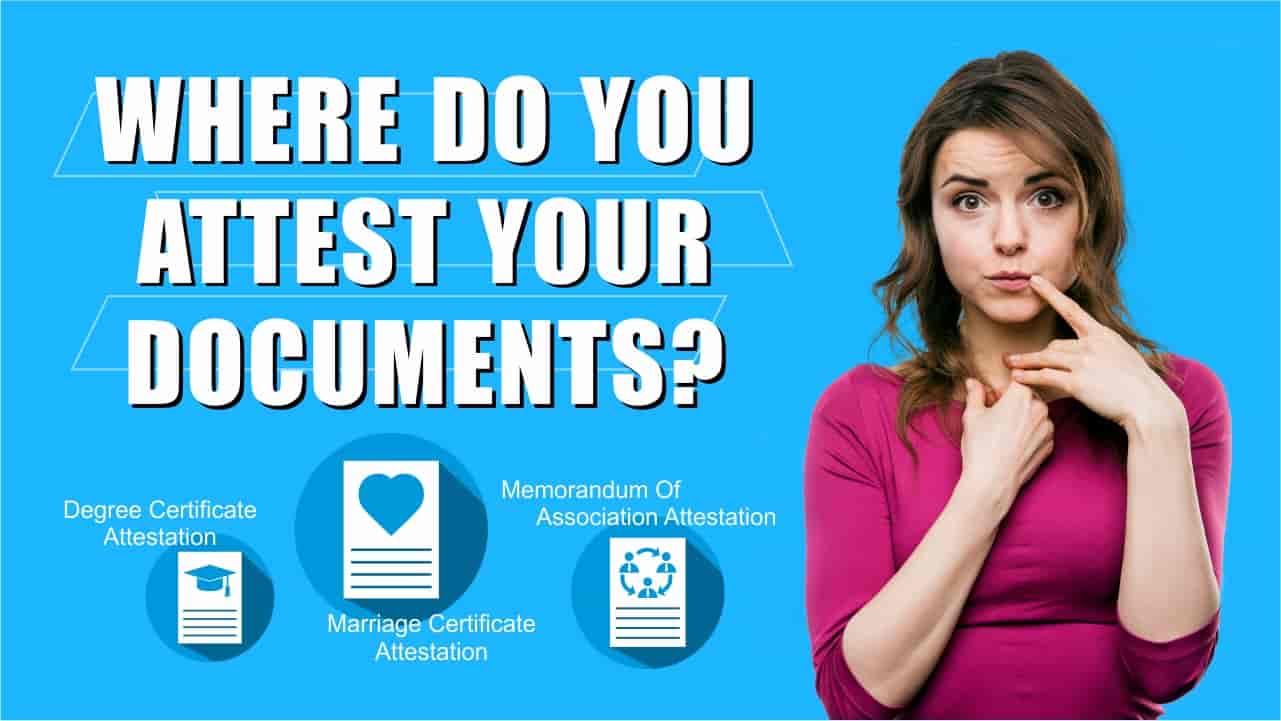 How to get your Documents Attested?

How many days it will take Certificate Attestation for Angola?

There’s a long list of documents that you may require attestation for. The time needed is based on a set of factors, for instance, for which country you mandate the legalization for, or the sort of documents, or the authority you require it from. Usually, it will take about a couple of weeks to a month to complete. The time will still be conditioned by factors referred to previously.

What is the cost required for Certificate Attestation for Angola?

The Angola certificate attestation fee changes from state to state. It may even be conditioned by the priority of the requirement, also from the place the documents were received, the type of the document i.e educational or commercial. The attestation price could be low or high if HRD attestation step is involved and still differ with the add-on facilities like legalization of documents with pick and drop service. To know the exact Angola attestation charges, call our sales executive now.

PEC has been functioning for over 6+ years now and procured itself the name of best services in India. We have built this belief and trust all due to the assisting and expertise that we have gained over the years. Let us show you how we can aid you with the best facilities:

Simple step by step process for your application

PEC services help make various procedures necessitated frequently much more convenient ensuring customer convenience. We make sure that we render explicit and authentic services by interposing you to 24*7 available team and supportive service. All you have to do is fill in the details of the facility that you require; upload and submit your original documents; make a payment online and you are done. While you relax, we’ll deliver you the stamped certificates and translated documents as per your requirement.